The 100% owned Tokop Gold Project is located on the prolific Walker Lane Trend in Esmeralda County (Tokop Mining District), approximately 80 km south of Tonopah. The land package spans over more than 31 sq km. Excellent infrastructure provides good access to the project site, and a number of deposit are currently developed or mined in nearby areas, including but not limited to Bullfrog, North Bullfrog, etc..

Nearby districts of Tonopah, Goldfield, and Bullfrog (near Beatty, NV) accounted for historical production of more than 8.3 million ounces gold and 143.5 million ounces of silver. 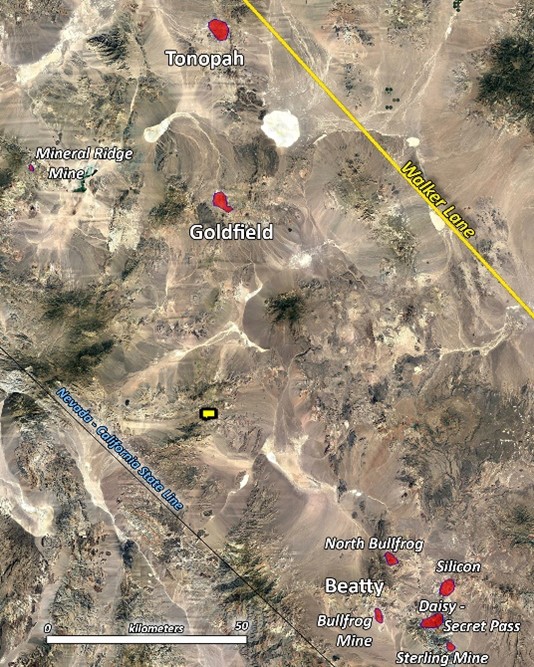 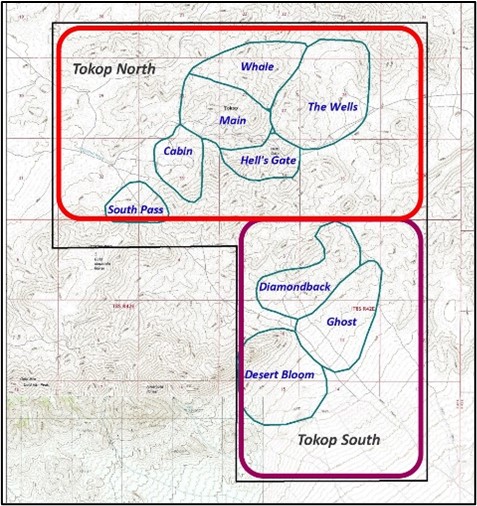 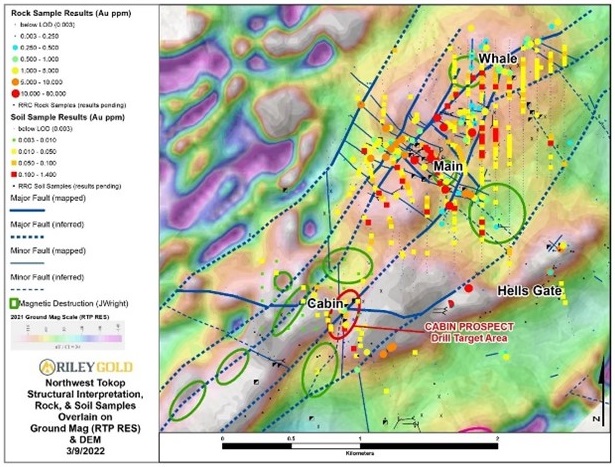 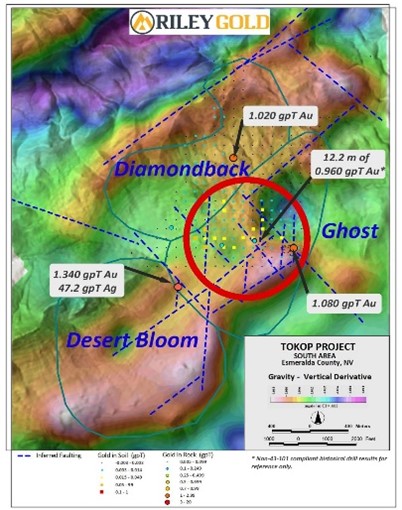 The RIRG model for Tokop North is similar to large mines in the Tintina Gold Belt of central Alaska and contiguous parts of the Yukon. The best known and most economically important of these include the Fort Knox, and Pogo gold mines in Alaska and the Eagle Mine of the Dublin Gulch Properties in the Yukon.  At Tokop, similar to those mines, sheeted quartz veins occur in a multi-phase, reduced, calc-alkaline granitoid intrusive of Jurassic to Cretaceous age (the Sylvania Stock).  Precambrian carbonate units (primarily the Wyman Formation) intruded by the stock are locally altered to skarn and hornfels.  More shaley units are locally metamorphosed as well.  Coupled with widespread hydrothermal alteration, both units may host gold mineralization of significant potential.  Shear-hosted veins extend for nearly two kilometres along strike at Tokop. To date, sampling of these vein systems has returned grades of up to 71.73 gpt gold and 970 gpt silver (historical and current sampling).  Additionally, there appears to be a significant overlapping, later, epithermal mineralizing event; perhaps related to alteration and gold mineralization found at Tokop South.

The dominant mineralizing system at Tokop South is more akin to ore deposits approximately 30 miles south and east of the project, like those of the Bullfrog District. Deposits of the Bullfrog District (surrounding Beatty, Nevada) are low-sulfidation, volcanic and sediment-hosted, epithermal gold deposits.  The Bullfrog Mine, operated by Barrick Gold which produced over 2.3 million ounces of gold and 3.0 million ounces of silver from 1989 – 1999 from open pit and underground workings, is a well-known example.  Low temperature quartz veins, silicification, and breccia zones along structural contacts may host high grade gold in this environment.  The host rocks for the system present at Tokop South are the same units as were mined at the Bullfrog Mine; the Tertiary Ammonia Tanks Tuff. Epithermal alteration and significant potential for gold mineralization may also persist into Precambrian Wyman carbonates, especially along structural contacts with the Ammonia Tanks Tuff.  Surface sampling in a near surface environment like that in evidence at Tokop South may only contain lower gold values at surface, though, as at Bullfrog Mine, those values can become bonanza grades deeper in the system.  However, limited surface rock sampling to date has revealed gold values to more than 1.2 gpT.

Results from more recent rock sampling in 2021 from various target areas at Tokop (currently totaling 400 samples) have shown values as high as 71.7 gpT gold from Tokop Main, 40 gpT gold from the Hell’s Gate target area, and 4 gpT from the Cabin area.  (See maps for Target Areas)

In 2021, Riley Gold initiated a maiden HQ3 (oriented core) 18-hole drill program, which was designed to test and confirm the limited historical drilling relative to known vein sets mapped over 1.5 kilometers (“km”), as well as vein orientations in the sub-surface

Standard QA/QC procedures were in place for all sample handling, chain of custody, and assaying, including the use of standards, blanks, and duplicate analyses at a minimum 20% (24% average) of all core analyses performed.

Charles Sulfrian, CPG, PG, and QP, supervised the drilling, has reviewed the drilling, sampling and chain of custody protocols and analytical results and has deemed them to be in compliance with NI 43-101 standards.

2013 drilling at the Tokop project yielded intercepts including:3

3 Reverse Circulation drilling results from 2013 for Ioneer (then Paradigm Minerals USA Corp, (Global Geoscience)) are quoted for historical reference only.

The above information has been reviewed and approved by Charles Sulfrian, CPG., Exploration Manager, of Riley Gold and a ‘qualified person’, as defined by National Instrument 43-101, Standards of Disclosure for Mineral Projects. 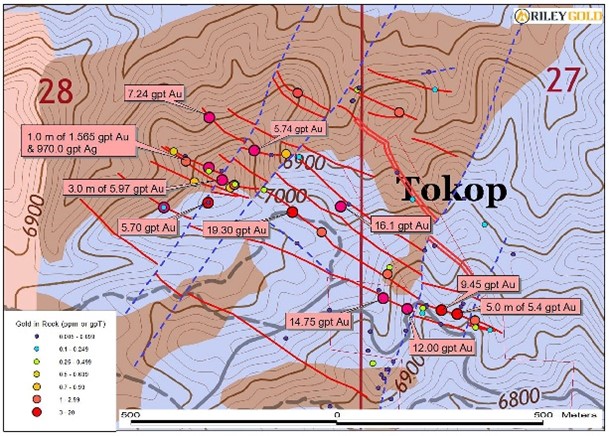 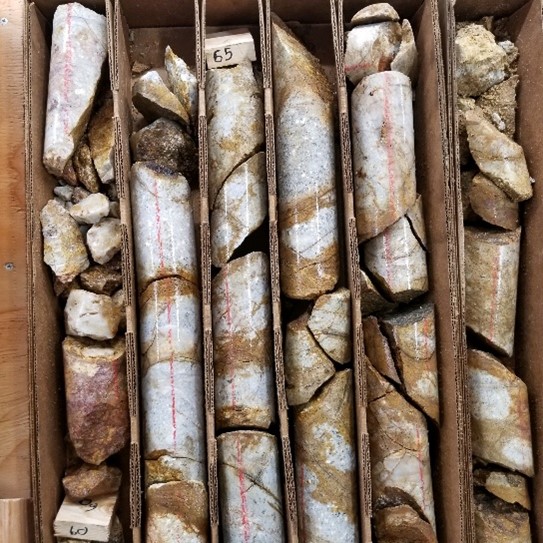