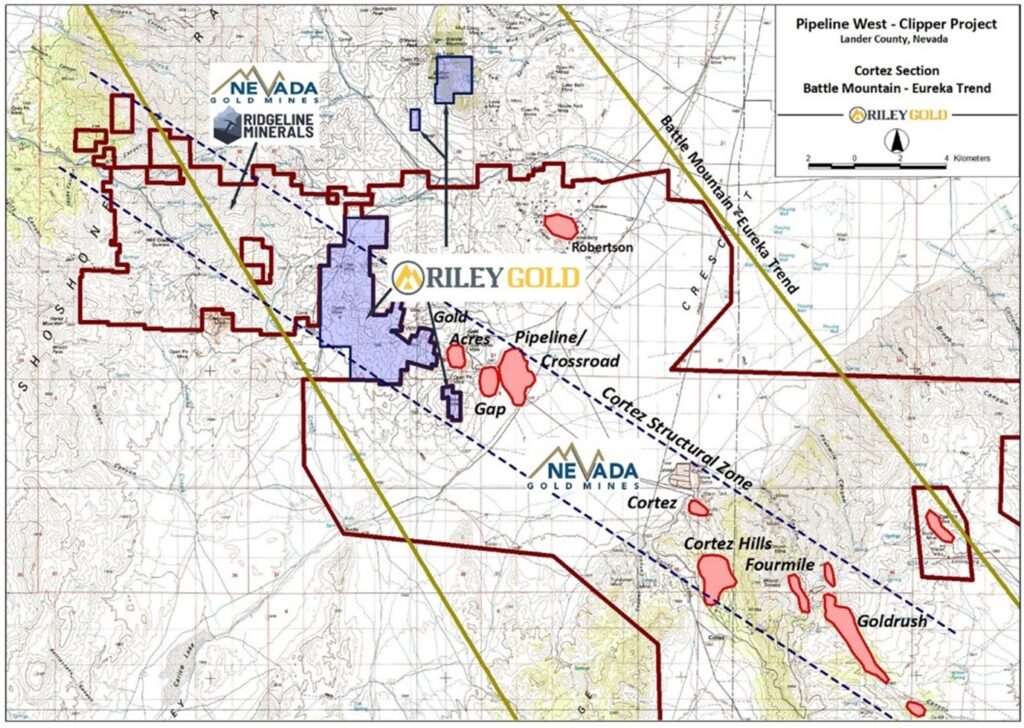 The targets at PWC are Carlin-type gold deposits, sometimes referred to as Sedimentary Rock Hosted Gold Deposits (SRHGD). Carlin-type gold deposits are generally epithermal replacement gold deposits where sub-micron sized gold particles occur in or around minute pyrite and arsenopyrite clusters in altered silty to sandy calcareous or carbonate rocks. Mineralizing fluids migrate up or along through-going structures and react with the sediments. These carbonate rocks can also be very carbonaceous (rich in organic carbon). The fluids tend to be acidic and attack the calcite in the carbonate (reactive) rocks. By dissolving the calcite from the silty or ‘dirty’ carbonates, enough of a framework remains to prevent collapse of the sediment allowing gold and sulfides to deposit. The sulfides are deposited due to the reducing nature of the organic carbon in the sediments. As the fluids spread through the rock, the temperature and pressure of the fluids drops. The change in acidity in the fluids along with coincident drops in temperature and/or pressure cause the gold to drop out of solution along with the sulfides. This process is called sulfidation.

Sometimes, the upper portions of these deposits are oxidized, destroying the sulfide minerals, and the gold can be recovered using heap leach technology. However, most ores are reduced, with up to several percent sulfides and must be milled, and oxidized via autoclave or roaster in order to free the gold for recovery. Carlin-type systems can form huge, multi-million-ounce gold deposits.

Interest in the Cortez area started in 1966 when the USGS reported anomalous gold in altered outcrops at the base of the Cortez Range. Mining has been ongoing since 1969 at Cortez. Several operators have worked on PWC over the years, but their approach was always the same. They focused on exploratory groundwork and drilling, usually offsetting older drill holes that intersected gold mineralization in the Lower Plate of the Roberts Mountains Thrust Fault. Some results were encouraging, but little attention was paid to looking at the property and underlying system as a whole.
With the benefit of time and building on the good work of others, Riley Gold was able to assemble and re-model older information from drilling to geochemistry and geophysics for a fresh look and a new approach to the exploration of the PWC Project.

Historical exploration included reverse circulation and core drilling, and while many drill holes were targeted at shallow silver occurrences near the historic Utah and Clipper silver mines within the PWC land package, much of the drilling was aimed at Carlin-style gold mineralization in the lower plate of the RMT system, primarily in the southeastern portion of the project area.  Drilling was first conducted in 1992, but Since 1994, drilling by other operators [such as Agnico-Eagle, Barrick Gold (Placer Dome), Columbus Gold, Hemlo Gold (Noranda Exploration), Navaho Gold, and Uranerz] generally focused on offsetting early drilling that intersected gold mineralization in the Lower Plate of the Roberts Mountain Thrust.

While some of the targets for these early holes were based on anomalous gold and pathfinder elements in soil sampling, mapping and limited geophysical work (ground magnetic) surveys. Most of the geophysical work, including  the gravity and a CSAMT survey over the southern portion of PWC went largely un-utilized. (The historical drilling conducted is non-43-101 compliant and the results are for historical reference only.1)

Soil and lithic sampling by previous operators left open-ended gold in soil anomalies within the target area depicted by the red ellipse. The large gap in older soil and lithic geochem surveys coincides with newly modeled CSAMT, aero-magnetic, and gravity anomalies.  Riley Gold intends to fill in the areas not covered by prior sampling (as well as re-sampling some of the older grid) with additional soil sampling.  Once soil sampling is complete, the results will be modeled with existing geophysics and new surface mapping to delineate new drill targets.

1The above information has been reviewed and approved by Charles Sulfrian, CPG., Exploration Manager, of Riley Gold and a ‘qualified person’, as defined by National Instrument 43-101, Standards of Disclosure for Mineral Projects. Older drilling results, from 1992 on, are quoted for historical reference only. 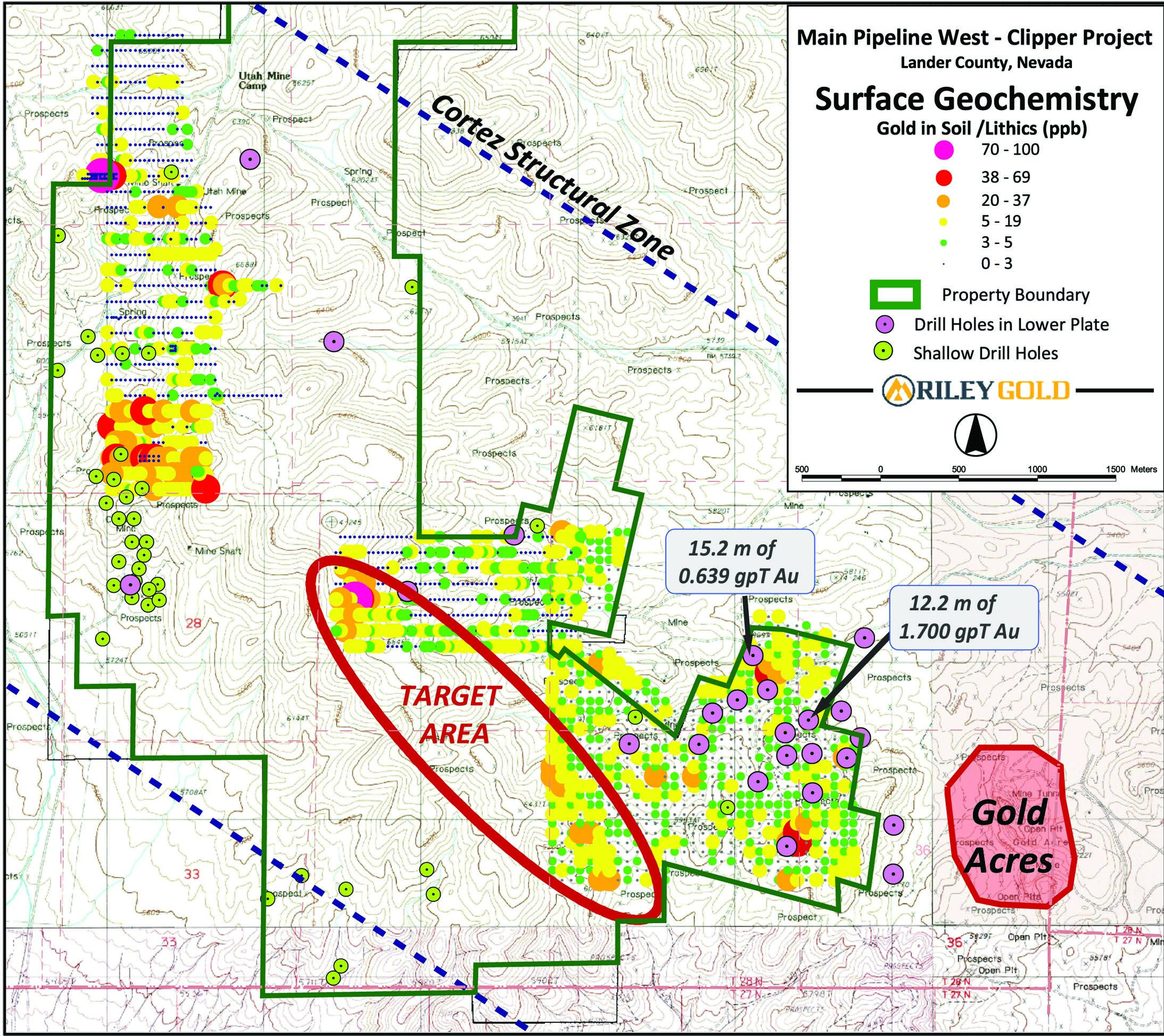 The Company conducted an extensive data review and geophysical modeling. New and detailed analyses of ground and aero-magnetic data, gravity, and Controlled Source Audio-Frequency Magneto-Telluric (CSAMT) surveys from past operators revealed multiple overlapping anomalies that point to structurally-controlled, high value drill targets within the Lower Plate of the Roberts Mountain Thrust system. Research into prior drilling at PWC proved that units of the Devonian Wenban are present within the project. However, large areas of PWC remain undrilled and open for potential discovery. A significant portion of these areas also offer drill targets at or above 500 m depth. 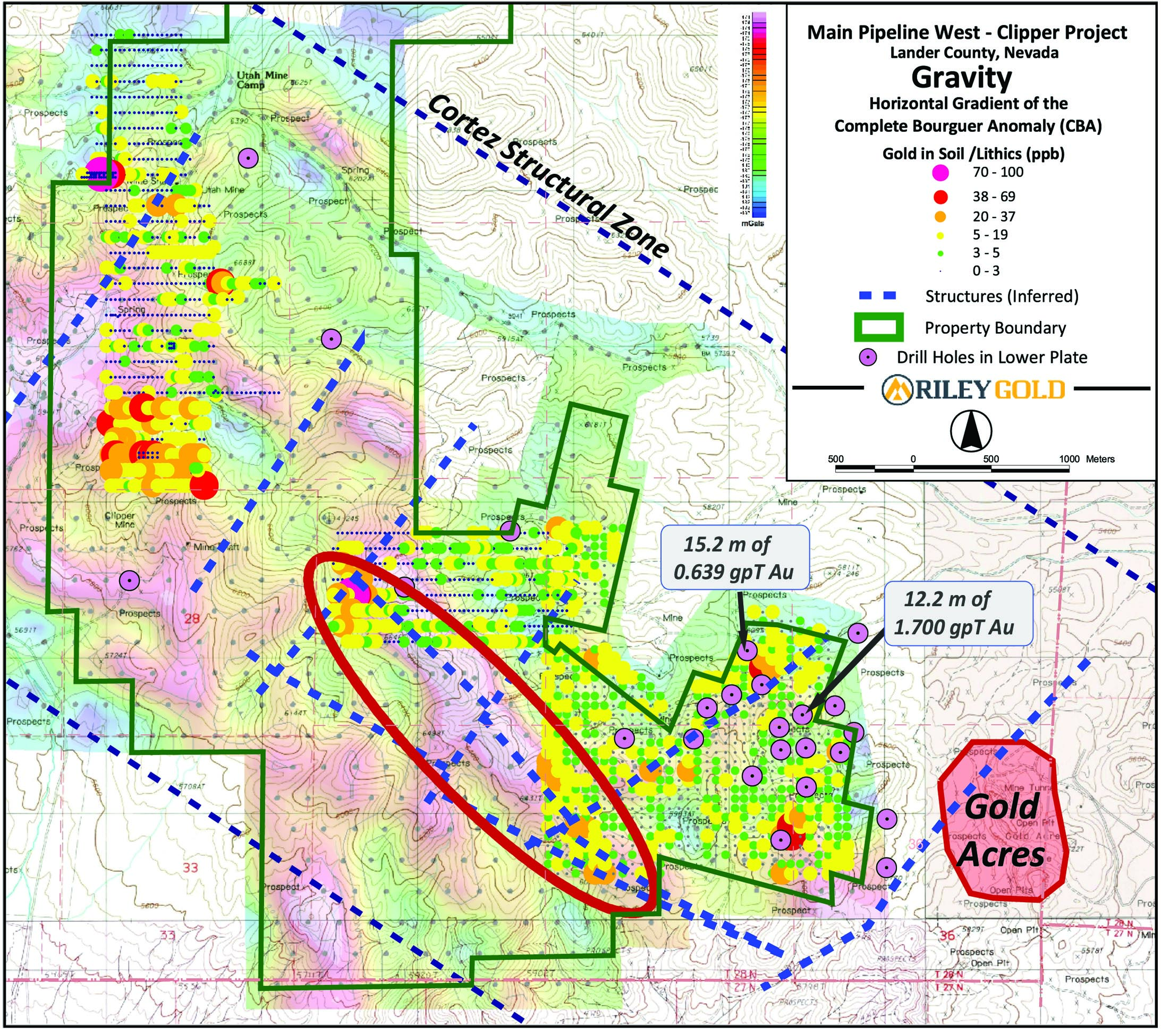 Drilling:
Historical drilling returned results of 4.6 m of 2.594 gpt at 324 m including a high value of 3.84 gpt gold at 283 m in rocks of the lower plate of the Roberts Mountain Thrust (“RMT”). Drill logs also show that the Devonian Wenban (“Wenban”) was intersected in most of the holes that penetrated to the lower plate. The Wenban is the primary host to gold mineralization in the prolific Cortez District, although the Silurian-Devonian Roberts Mountain Formation is also known to be an economic host rock in the Cortez Trend.

Future drilling will test 300-500 m deep, high-grade Carlin-type gold targets along a 3-km trend defined by the red ellipse (see above image). These new drill targets are supported by open gold-in-soil and other pathfinder element anomalies and a re-interpretation of historical geophysical data.