Vancouver, B.C. April 12, 2022 – Riley Gold Corp. (TSX.V: RLYG) (OTCQB: RLYGF) (“Riley Gold” or the “Company”) is pleased to announce that an extensive review of data collected on the Pipeline West/Clipper Gold Project (“PWC”) located in Lander County, Nevada (within the Battle Mountain-Eureka Trend), has identified historical drilling with results of 4.6 meters (“m”) of 2.594 grams per tonne (“gpt”) at 324 m including a high value of 3.84 gpt gold at 283 m in rocks of the lower plate of the Roberts Mountain Thrust (“RMT”).  Drill logs also show that the Devonian Wenban (“Wenban”) was intersected in most of the holes that penetrated to the lower plate.  The Wenban is the primary host to gold mineralization in the prolific Cortez District, although the Silurian-Devonian Roberts Mountain Formation is also known to be an economic host rock in the Cortez Trend.

“Riley Gold has been re-evaluating the relatively large amount of historic data at PWC, and in particular re-modelling the geophysical data, soil sample grids and historic drill intercepts. We felt that the project demanded a fresh look at the potential for a large, reduced Carlin-type gold deposit in the Wenban and underlying Roberts Mountains formations. The on-going re-interpretation and review has our team very excited about the relatively shallow new targets, within the Wenban, that are emerging and definitely warrant further exploration.  As we continue to evaluate historical data, we are getting more and more excited and confident to see similarities (including the interpreted Wenban) within the geology to neighbouring projects” said Todd Hilditch, President & CEO of Riley Gold Corp.

Previous drilling at PWC stretches as far back as 1994. While many drill holes were targeted at shallow silver occurrences near the historic Utah and Clipper silver mines within the PWC land package, some drilling was aimed at Carlin-style gold mineralization in the lower plate of the RMT system.  A few of these earlier holes encountered significant gold mineralization (that appears to be in the Wenban) in the lower plate carbonate facies

Much of the early drilling was either by conventional mud rotary or reverse circulation drill methods. This drilling intersected several intervals of significant gold mineralization. The historical drilling conducted is non-43-101 compliant and the results are for historical reference only.

The targets for these holes were based on anomalous gold and pathfinder elements in soil sampling, mapping and geophysical (air magnetic and gravity) surveys.  A CSAMT survey over the southern portion of PWC went largely un-utilized.

Of all the holes drilled in the project area, those that penetrated the lower plate sequence of the Wenban and Roberts Mountain formations concentrated on areas of gold mineralization or were widely spaced, leaving large areas untested (Figure 2). 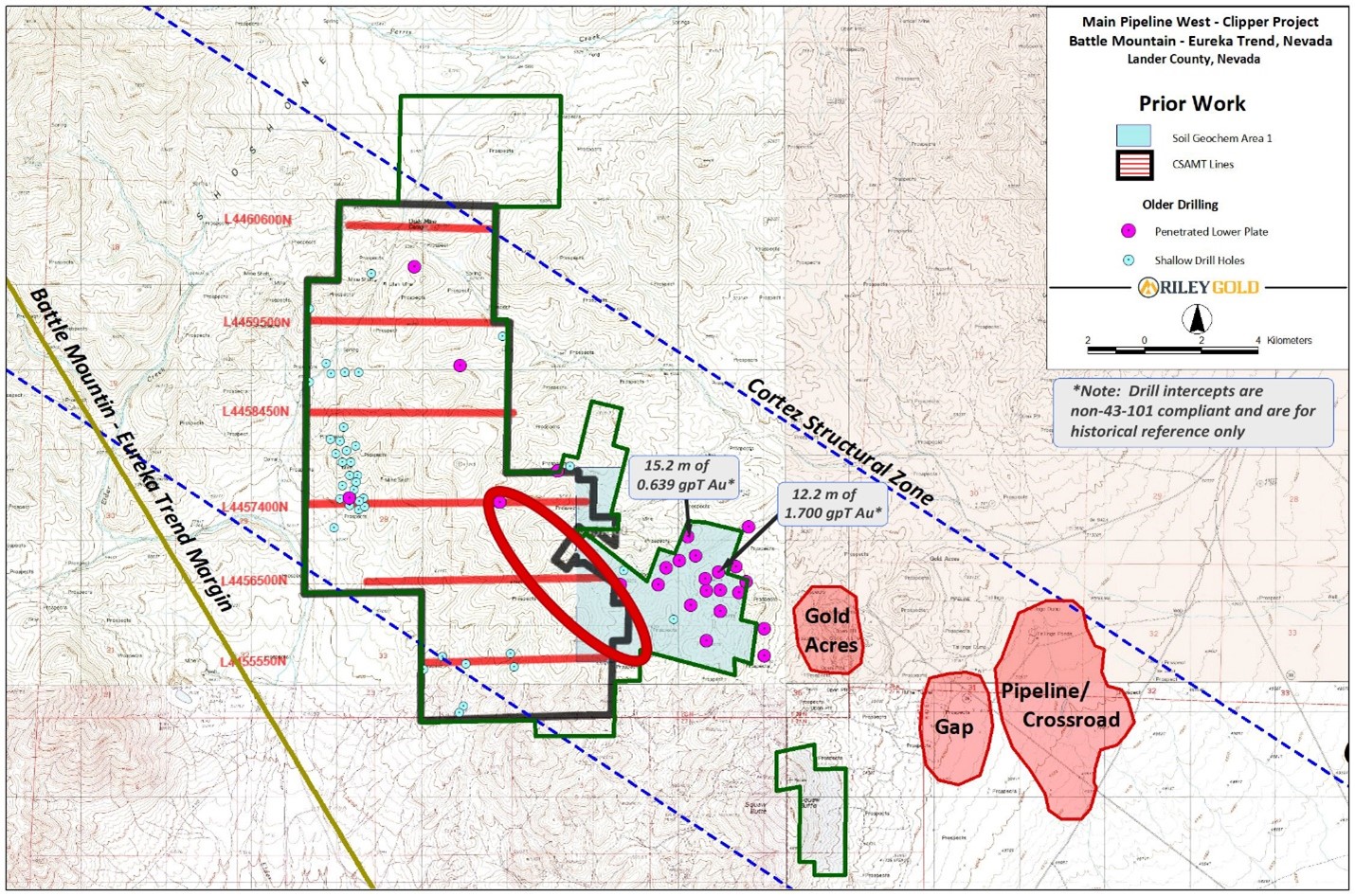 The red ellipse locates what may be a very prospective target for a Goldrush or Fourmile style structurally controlled, Carlin type of deposit at depths of less than or equal to 500 m.

Historic CSAMT, gravity, and magnetic geophysical data combined with existing soil grids, covering only a part of PWC, left little doubt that a re-interpretation of the existing data, combined with recently acquired aeromagnetic survey data could lead to new drill target identification with indication of potential structures and targets not previously tested.  Additional mapping and sampling field work to fill in data gaps and proof-of-concept of new target interpretation is planned for 2022 prior to an initial drilling campaign.

The Cortez section of this trend has a gold endowment of more than 50 million ounces (past production + current reserves & resources)[i]. Several multi-million ounce past and currently producing gold mines, including Pipeline, Cortez Hills, Fourmile, and Goldrush are located southeast of PWC along strike of the Cortez Trend.  Northwest of PWC, other large mines along the northern portion of the Battle Mountain – Eureka Trend include Copper Canyon, Phoenix, Marigold, and Lone Tree.

This news release has been reviewed and approved by Charles Sulfrian, CPG., Exploration Manager, of Riley Gold and a ‘qualified person’, as defined by National Instrument 43-101, Standards of Disclosure for Mineral Projects.  The Qualified Person has not completed sufficient work to verify the historic information on PWC, particularly in regards to the historical drill results. However, the Qualified Person believe that drilling and analytical results were completed to industry standard practices. The information provides an indication of the exploration potential of PWC but may not be representative of expected results.

Certain disclosures in this release constitute “forward-looking information” within the meaning of Canadian securities legislation (such statements being referred to as “forward-looking statements”). Forward-looking statements are statements that are not historical facts and are generally, but not always, identified by words such as the following: expects, plans, anticipates, believes, intends, estimates, projects, assumes, potential and similar expressions. Forward-looking statements involve risks, uncertainties and other factors that could cause actual results, performance, prospects and opportunities to differ materially from those expressed or implied by such forward-looking statements, including statements regarding the exploration program at PWC, including results of historical drilling, sampling, geophysics, interpretations and future exploration plans at PWC.  Factors that could cause actual results to differ materially from these forward-looking statements include, but are not limited to, variations in the nature, quality and quantity of any mineral deposits that may be located, the Company’s inability to obtain any necessary permits, consents or authorizations required for its planned activities, and the Company’s inability to raise the necessary capital or to be fully able to implement its business strategies. The reader is referred to the Company’s public disclosure record which is available on SEDAR (www.sedar.com).  Although the Company believes that the assumptions and factors used in preparing the forward-looking statements are reasonable, undue reliance should not be placed on these statements, which only apply as of the date of this news release, and no assurance can be given that such events will occur in the disclosed time frames or at all.  Except as required by securities laws and the policies of the TSX Venture Exchange, the Company disclaims any intention or obligation to update or revise any forward-looking statement, whether as a result of new information, future events or otherwise.