Riley Gold’s maiden drill campaign at Tokop was designed to confirm initial structural interpretations for vein and alteration orientation with potential to host gold and silver mineralization. The drill program results confirmed our hypothesis that subsurface high-grade gold mineralization is present, correlative to that of a reduced intrusive related gold system (“RIRG”). This core drill program of 12 holes had gold/silver mineralization, above a cut-off grade of 0.3 grams per tonne (“gpt”) gold and 20 gpt silver, in 10 of 12 holes with a high of up to 17 gpt gold in the first 3 holes (see the Company’s June 28, 2021 news release) and up to 2.63 gpt gold in the remaining holes.

“We are pleased with the inaugural Tokop 2021 exploration program. To date, Tokop has delivered results of up to 17 gpt gold in drilling, up to 72 gpt gold in rock samples and up to 1.4 gpt gold in soil samples, with additional rock and soil assay results still to be received (see overview in Figure 1 below). Interpretation and modeling of the data from all 2021 exploration initiatives (mapping, sampling, geophysics and drilling) continues as data is received, and is leading to additional exploration and drill targeting in 2022.” commented Riley Gold CEO, Todd Hilditch.

Furthermore, on October 20, 2021, Riley Gold announced the discovery of two new prospective zones at Tokop and initiated soil geochemistry and geological mapping programs on both zones. These programs, covering more than 5 sq km, are now complete.  Ground magnetics and gravity surveys were also recently finalized and are being interpreted prior to being released. American Assay Laboratories, located in Sparks, Nevada, recently advised Riley Gold that all remaining rock and soil sample assays and multi-element geochemical analyses are expected back to the Company in February, 2022.

“In addition to our first round of drilling, results of our initial mapping, sampling, and data review confirm the presence of a second mineralizing system at Tokop.  This epithermal event (similar to those systems at Bullfrog and North Bull Frog) appears to be widespread, and over-printing the older RIRG system, opening up new and exciting areas for further investigation.” said Exploration Manager, Charles Sulfrian. “We eagerly await results from our recently completed sampling programs and new geophysical data. The stepwise exploration approach that the Riley Gold team has adopted, from historic data compilation, to soil sampling, structural mapping, rock sampling, confirmation drilling, as well as newly acquired geophysics, will lead us to generate robust drill targets which we anticipate drilling in 2022. This interpretive work will target both styles of gold mineralization throughout the property and has the potential to expand Tokop into a district-scale opportunity.”

Remaining assay results from Riley Gold’s 12-hole core drilling program, completed in mid-September of 2021, have now been received and are presented in Table 1.  Highlights of that program include previously announced results (see the Company’s June 28, 2021 news release):

Table 1: 2021 drill results above the cut-off grade of 0.3 gpt and 20 gpt (significant intercepts highlighted in bold)

Riley Gold’s Tokop team, led by Project Manager Hillary Jochens, identified that one of the newly discovered zones represents a different mineralizing event than was drilled during Riley Gold’s recently completed core drill program that targeted an orogenic, RIRG system.  Drilling to date is more than 4 kilometres (“km”) away from this newly identified area.  The newly recognized mineralization is typical of a low sulfidation epithermal system which cuts through ~10ma volcanics, and resembles that of Augusta Gold’s Bullfrog Mine Property (“Bullfrog”) (past production plus current M&I resources of >3.3 MM ounces gold and 3.8 MM oz silverii, and the Corvus/now AngloGold Ashanti Ltd. North Bull Frog Deposit (“North Bullfrog”) (M&I resource of 2.1 MM oz gold and 10.3 MM oz silver[i]) which is south-east of Tokop and on trend.

Work on the second new zone, within Tokop’s 21 sq km land package, is south and west of the Company’s recent drilling. Here, Riley Gold discovered a structural zone which includes a felsic intrusive dike swarm more than 200-m-wide which cross cuts Wyman formation limestone and shale as well as significant ferruginous quartz veining and vein breccias mapped over a strike length of more than 500m. A soil grid over the area was completed in October 2021. Details and highlights of this soil program are described below. Two trenches were mapped and sampled in November 2021, with all assay results anticipated by February of 2022. Preliminary observations of the trench mapping sans assay results found that intrusive felsic dikes and sills cut through limestone and shale. Abundant scorodite (a hydrated iron arsenate), which is often associated with gold mineralization, occurs laterally along bedding where these intrusives are in contact with sedimentary rocks.

Rock sampling to date has returned values up to 72 gpt Gold. Ongoing and continuous rock sampling includes up to 400 samples taken across various areas within the 21 sq km land package. Assays returned to date include a range of trace to 72 gpt gold and are assisting with identification of significant areas of interest. Approximately 60% of samples collected to date have gold and multielement results returned from the assay lab. Pending assays are anticipated by early February. Table 2 (below) highlights several samples not previously reported.

Soil samples are being analyzed for gold and multi-element geochemistry, as well as pH and conductivity. To date, 336 soil samples have been collected, with assays back for 202 samples. Anomalous gold in soil from assays received to date have assisted in further delineating gold-silver-arsenic-bismuth bearing structures partially buried under soil/ pediment cover. Additionally, a new unknown anomaly with little to no outcrop was discovered near Riley Gold’s epithermal target. 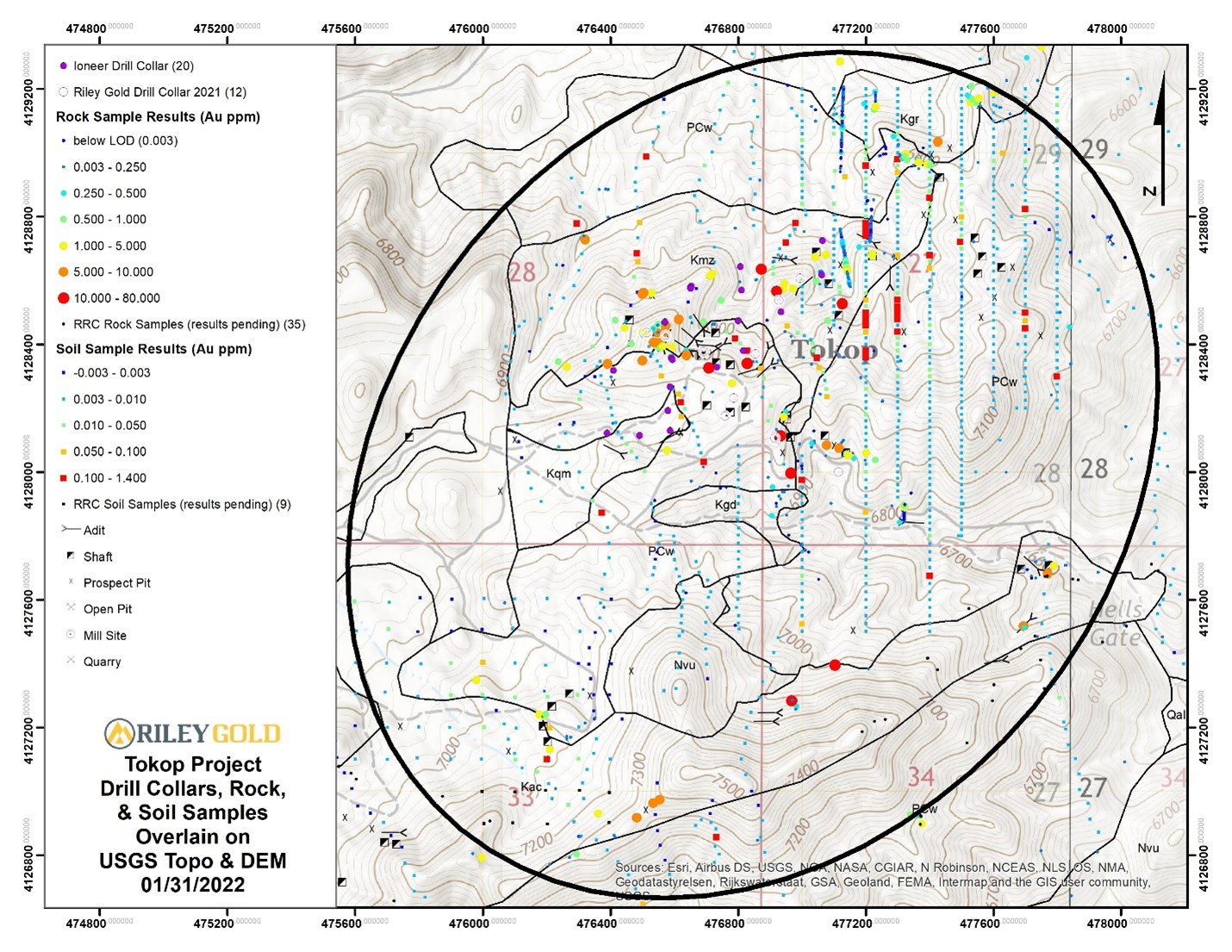 Recent work at Tokop revealed more than one style of gold mineralization and host rock. One is a RIRG system and the other is a system that is typical Walker Lane-style epithermal mineralization more akin to ore deposits approximately 30 miles south and east of the project like those of the Bullfrog District. Deposits of the Bullfrog District (surrounding Beatty, Nevada) are typical Walker Lane low-sulfidation, volcanic and sedimentary-hosted, epithermal gold deposits like the Bullfrog Mine operated by Barrick Gold which produced over 2.3 million ounces of gold and 3.0 million ounces of silver from 1989 – 1999[ii], from open pit and underground workings.  Additional exploration and deposit development in the Bullfrog District includes work by Corvus (now AngloGold), Coeur Mining, Kinross, and Augusta Gold Corp.

The RIRG model is similar to large mines in the Tintina Gold Belt of central Alaska and contiguous parts of the Yukon. The best known and most economically important of these include Fort Knox (>8.0 M oz gold produced through 2020 with an additional 2.47 M oz P+P Reserve[iii]), Pogo gold mine (4.0 M oz gold produced through 31 March 2021 with additional 3.956 M oz M & I resource and 1.740 M oz Inferred Resource[iv]) and the Eagle Mine of the Dublin Gulch Properties in the Yukon (M & I resource of ~2.98 M oz gold[v]). At Tokop, similar to those mines, sheeted quartz veins in a multi-phase, reduced, calc-alkaline granitoid intrusive as well as surrounding metamorphosed sedimentary rocks, coupled with widespread hydrothermal alteration, may host gold mineralization of significant potential. Shear-hosted veins extend for nearly two km along strike at Tokop. To date, sampling of these vein systems returned grades of up to 71.73 gpt gold and 970 gpt silver (historical and current sampling). This year’s drilling has confirmed high grade mineralization down dip from surface rock chip sampling in the first three holes released, with grades up to 17.1 gpt gold and 235 gpt silver (see Riley Gold’s press release from June 28, 2021).

This news release has been reviewed and approved by Charles Sulfrian, CPG., Exploration Manager, of Riley Gold and a ‘qualified person’, as defined by National Instrument 43-101, Standards of Disclosure for Mineral Projects.  The Qualified Person has not completed sufficient work to verify the historic information on Tokop, particularly in regards to the historical drill and chip sample results. However, the Qualified Person believe that drilling and analytical results were completed to industry standard practices. The information provides an indication of the exploration potential of Tokop but may not be representative of expected results.

(*) Gold assay method (AAL code AUFA50/ICP) is a fire assay technique of a 50 gram pulverized sample including traditional fusion, cupellation, and digestion of all silver from the resulting bead followed by analysis using ICP-AES (Inductively coupled plasma-atomic emission spectroscopy). Typically, this method is used for trace levels of gold.  Any sample that produces an over-limit gold value of greater than 10 parts per million or ppm (equivalent to grams per ton or g/t) via the AUFA50/ICP-AES gold assay technique is sent for fire assay with a gravimetric finish (AAL Method FA50/GRAV) which is a more accurate methodology at gold grades greater than ICP readings. Fire Assay with a gravimetric ‘finish’ has no ‘upper’ detection limit (I.e., fire assay with gravimetric finish is used for fineness assays of doré up to pure gold).  Samples where visible gold is suspected are sent to screen metallics analysis and all samples that fire assay above 1 ppm Au are re-analyzed with the screen fire method (AAL code SFA 50) which employs a 1kg pulp screened to 100 microns with assay of the entire oversize fraction and duplicate 50g assays on the undersize fraction. Screen Fire assays were run on 34 large pulps from the first two core holes.  Most gold values appear stable with little contribution from coarse gold; however, four of the group did suggest some contribution from relatively coarse gold in the +150-mesh fraction, wherein the assay value of the coarse fraction was 10 to 15 times that of the fine fraction.  Of course, the relatively small weight of the coarse fraction versus the fine fraction means that there is not enough coarse gold to influence the overall grade of the material.  This would suggest that traditional fire assay techniques will suffice for normal assaying of core materials.  Riley Gold will continue to monitor these levels and continue conducting screen fire assays on a significant number of core samples as needed, especially if visible gold is noted in core. The intercept intervals presented in the drill highlights and table are apparent widths of mineralization. They were calculated by using weighted averages of assay results times the length of the split core sample.