On March 28, 2022, Riley Gold announced a significant increase to its Tokop land package (at Tokop South) which now consists of more than 31 square kilometres within Nevada’s prolific Walker Lane Trend.  The claims were staked based on the interpretation and results of the exploration activity conducted at Tokop South.

According to Hillary Jochens, Tokop Project Manager, “Initial mapping plus soil and rock sample data, as well as hyperspectral alteration and geophysical data analyses combine to highlight several high-priority targets within the newly acquired ground. This represents an exciting opportunity for further exploration. At the Ghost prospect, the occurrence of several parallel sets of northerly trending epithermal veins and structures is analogous to stockwork zones with 0.5 – 1 gram per tonne gold in the Bullfrog Mine District.  This area could represent very prospective drill targets for higher grade gold at depth.” (Ms. Jochens is the former Exploration Manager for Augusta Gold at their Bullfrog Mine Project at Beatty, Nevada.)

Gravity and ground magnetic susceptibility surveys played an important role in Riley Gold expanding its claim block at Tokop South.  Figure 2, Figure 3 and Figure 4 illustrate some of the gravity and magnetic data for the area.  Gravity generally indicates (by the warm colors) that large areas of potential host rocks pЄ Wyman Formation carbonate rocks underlie a thin veneer of pediment.  One sample collected from a prospect pit in the Wyman yielded 1.34 gpt gold and 47.2 gpt silver (See Figure 2,3, and 4).  Otherwise, cool colors can indicate areas of lower-density rocks, including alluvium, or at Tokop South, often volcanics of the Ammonia Tanks Tuff.  Many of the epithermal veins occur in the tuffs, in similar style to those at the Bullfrog Mine.  One sample cut from chalcedonic to opaline vein material ran 1.08 gpt gold and 8.97 gpt silver; another yielded 1.02 gpt gold and 8.32 gpt silver from another epithermal vein nearly 1 kilometre away.  These grades are analogous to those found at the Bullfrog and Montgomery-Shoshone mines in chalcedonic-opaline stockwork zones[i].

Image 1 shows typical high-level opaline chalcedony veins seen mostly at Tokop South (Ghost prospect) but elsewhere, too, at Tokop.  The veins represent silica-rich fluids moving up structures and fractures along faults and other contacts.  They are often devoid of gold and other pathfinder elements.  These veins usually occur above boiling zones where gold may have been deposited.  The depth to potential gold mineralization can vary from a few meters (“m”) to 200 m or more.  Reverse circulation drilling at Tokop South (Ghost prospect) was detailed in an internal report for High Frontier Resources[ii] in 1990. One hole near such a vein encountered 12.2 m of 0.96 gpt gold from surface (Figure 2). 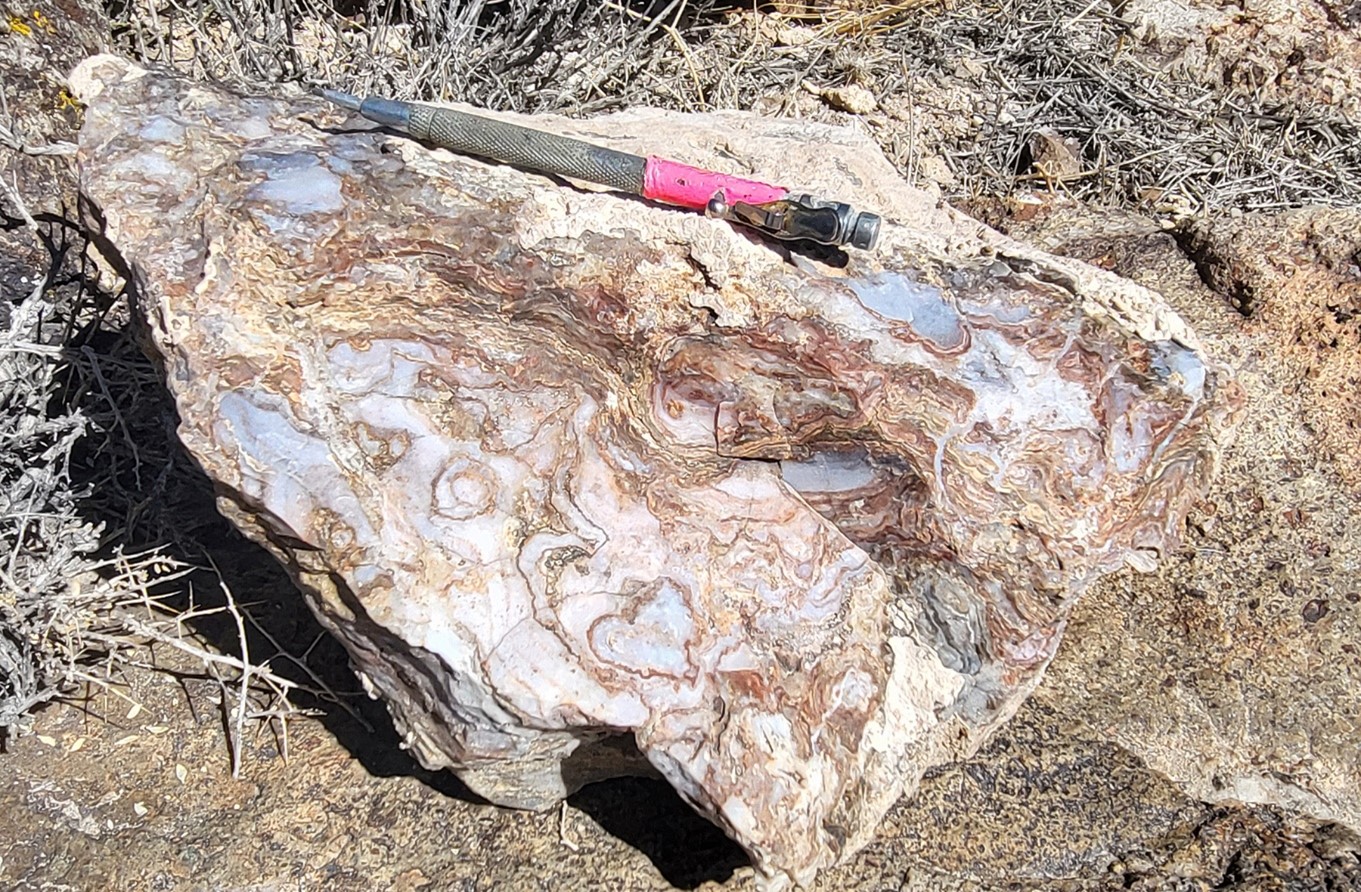 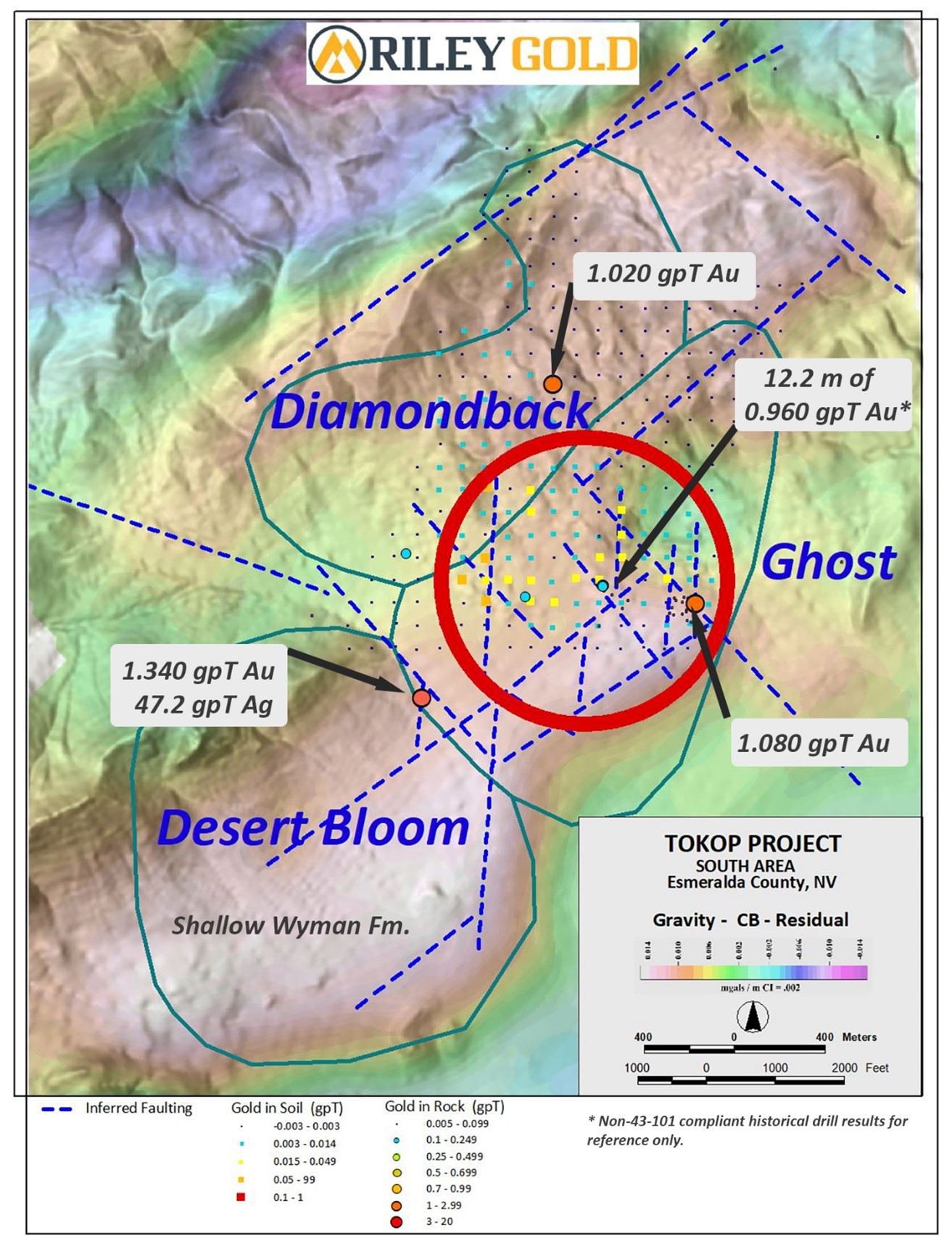 In Figure 2, the red circle denotes a complex zone of intersecting structures and locally intense alteration.  This is also the area where rotary reverse circulation drilling from 1990 intersected 12.2 m of 0.96 gpt gold from 0 – 12.2 m, including 6.1 m of 1.6 gpt gold in a structurally complex area at a faulted contact between pЄ Wyman carbonates and Miocene Ammonia Tanks Tuff.  The abundance of parallel northerly trending structures appears to be significant and is very encouraging for future exploration in the area. Several geochemical trends in soils suggest evidence of additional northerly trending veins under thin alluvial cover. 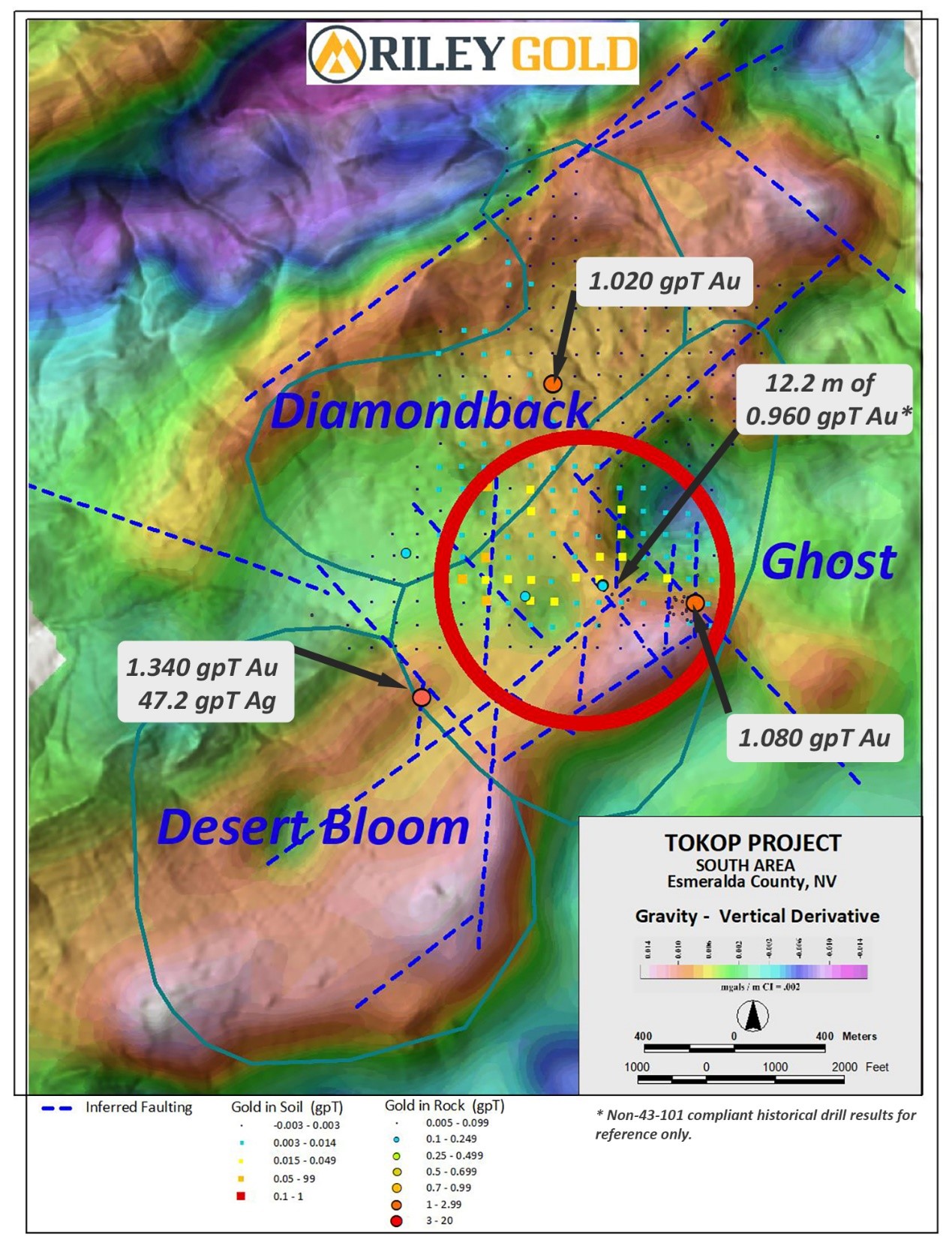 Figure 3 relates to the rate of change in elevation of units of differing density an is often used to help interpret structure.  Figure 3 strongly supports the structural interpretation. 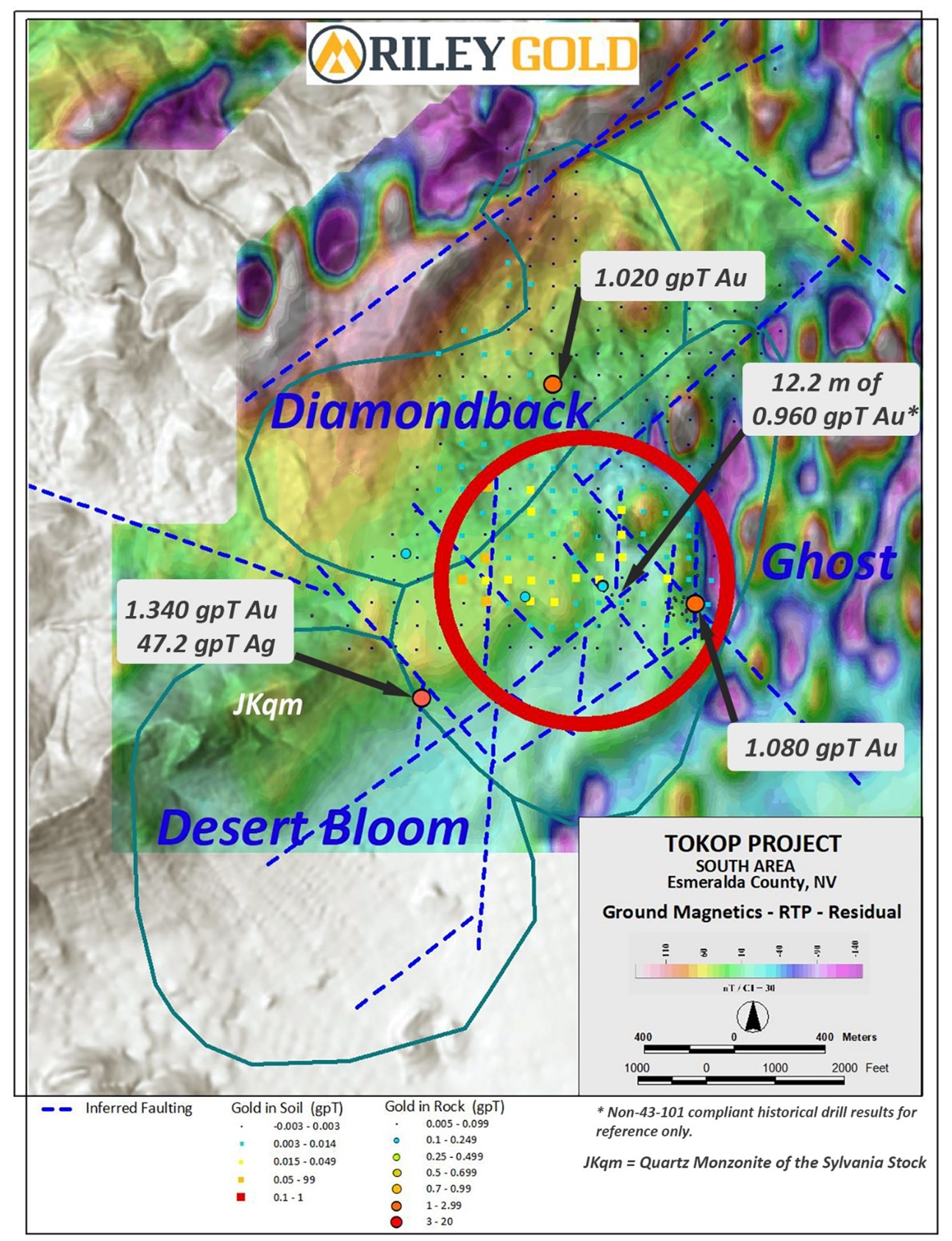 Subdued magnetic response (cool colors) in the above Figure 4, Reduced to Pole (RTP) Total Magnetic Intensity (TMI) underscores the fact that the felsic intrusives of the Sylvania Stock, here Jurassic-Cretaceous quartz monzonite, (JKqm) are reduced, along the southwestern side of the new claim block.  Other areas near the Tokop South (Diamondback prospect) area show higher magnetic response (warm colors), suggesting a buried intermediate intrusive. Such intermediate intrusives may play a key role in providing the heat and possibly mineralizing fluids to the system. However, this hypothesis is not yet supported by accurate age dating and more detailed geochemical and petrographic analyses.

A program of detailed mapping and additional soil and rock sampling is planned to begin later this spring, leading to the development of high-quality drill targets.

This news release has been reviewed and approved by Charles Sulfrian, CPG., Exploration Manager, of Riley Gold and a ‘qualified person’, as defined by National Instrument 43-101, Standards of Disclosure for Mineral Projects.  The Qualified Person has not completed sufficient work to verify the historic information on Tokop, particularly in regards to the historical drill and chip sample results. However, the Qualified Person believes that drilling and analytical results were completed to industry standard practices. The information provides an indication of the exploration potential of Tokop but may not be representative of expected results.

[i] GSN 1995 : Geology and Ore Deposits of the American Cordillera Symposium Proceeding