Riley Gold’s Pipeline West adjoins the NGM claim boundary on the west and lies just 1,000 metres west of NGM’s Pipeline/Gap Mine as well as only 600 metres west of the NGM’s Gold Acres open pit, where a window into carbonates of the lower plate of the Roberts Mountains Thrust outcrops.  The Company is also excited to report that the majority of Riley Gold’s remaining Pipeline West claim boundary (north and west), that adjoined Ridgeline Mineral’s (“Ridgeline”) Swift project is now subject to a recently announced earn-in transaction between Ridgeline and NGM whereby NGM can earn up to a 70% interest by spending US$30M (up to 75% by arranging debt funding for Ridgeline’s portion of development costs).The September 22, 2021 news release can be found on SEDAR or Ridgeline’s website. See Figure 1 below for approximate project locations and boundaries.

“We commend both Ridgeline and NGM on this earn-in agreement of the highly prospective Swift project within a region well known by NGM due to their past and current production and their currently reported gold reserves and resources of approximately 35.2 million ounces of gold within the Cortez Complex[i]. The Battle Mountain-Eureka Trend, and particularly this portion of the trend, has been blessed with favourable geology and very large gold deposits like few places on earth. Having a major gold producer continuing to explore regionally, and working with junior explorers too, is a proven model for success. We are now essentially surrounded by NGM and look forward to beginning our own exploration program at Pipeline West”, commented Todd Hilditch, CEO.

Exploration at Pipeline West is expected to target lower plate carbonates with deeper drilling than previously completed, which has been less than 250 metres on the majority of the property. Soil geochemistry, detailed mapping and geophysics (including magnetics and gravity) are anticipated to be utilized, in an effort to further define favourable structures to target for drilling. 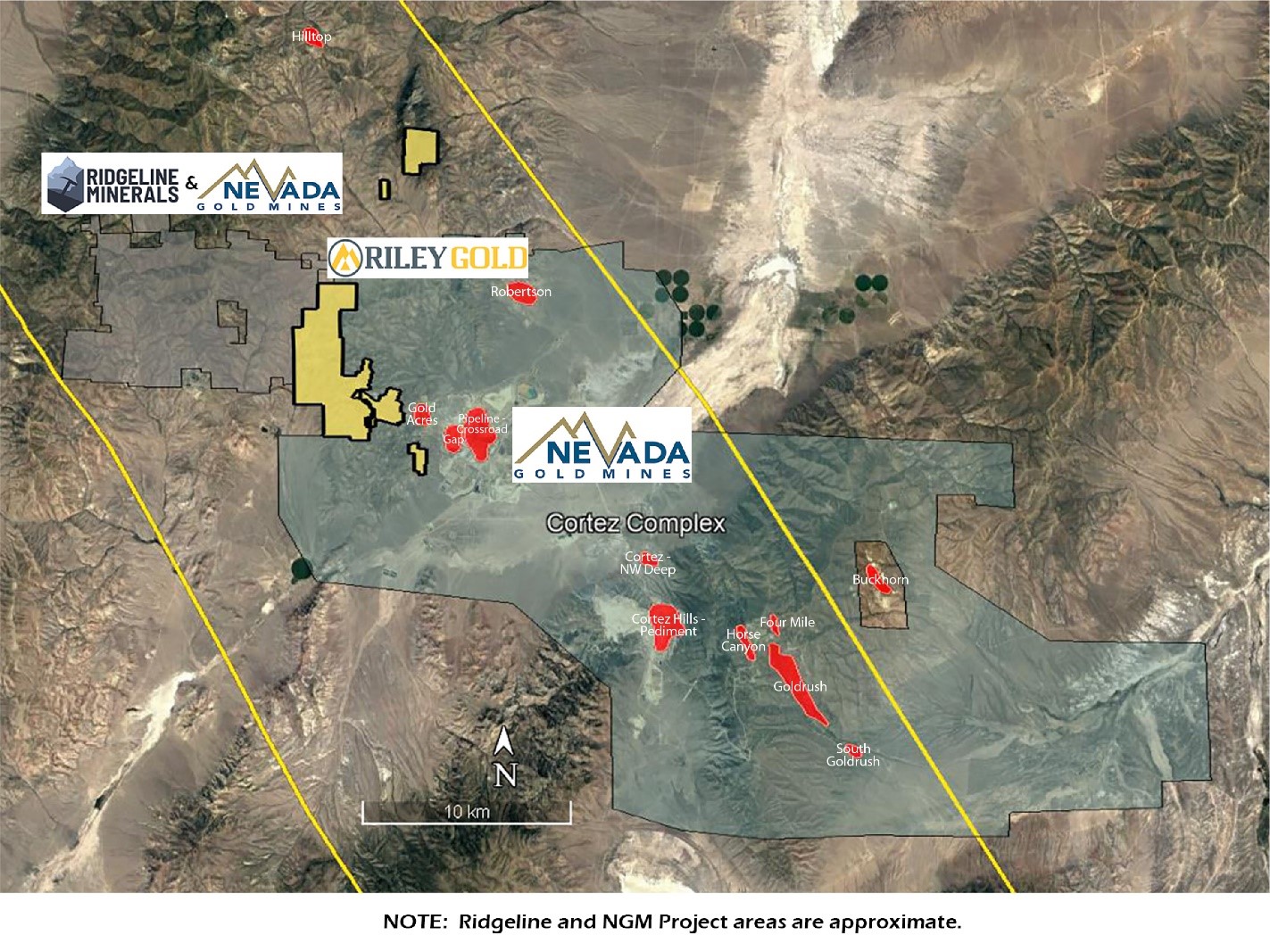 This news release has been reviewed and approved by Charles Sulfrian, CPG., Consulting Geologist, of Riley Gold and a ‘qualified person’, as defined by National Instrument 43-101, Standards of Disclosure for Mineral Projects.  The Qualified Person has not completed sufficient work to verify the historic information on Tokop, particularly in regards to the historical drill and chip sample results. However, the Qualified Persons believe that drilling and analytical results were completed to industry standard practices. The information provides an indication of the exploration potential of Tokop but may not be representative of expected results.

Certain disclosures in this release constitute “forward-looking information” within the meaning of Canadian securities legislation (such statements being referred to as “forward-looking statements”). Forward-looking statements are statements that are not historical facts and are generally, but not always, identified by words such as the following: expects, plans, anticipates, believes, intends, estimates, projects, ideally, assumes, potential and similar expressions. Forward-looking statements involve risks, uncertainties and other factors that could cause actual results, performance, prospects and opportunities to differ materially from those expressed or implied by such forward-looking statements, including statements regarding the exploration program at Pipeline West, including results of drilling, sampling, geophysical surveys and future exploration plans at Pipeline West.  Factors that could cause actual results to differ materially from these forward-looking statements include, but are not limited to, variations in the nature, quality and quantity of any mineral deposits that may be located, the Company’s inability to obtain any necessary permits, consents or authorizations required for its planned activities, and the Company’s inability to raise the necessary capital or to be fully able to implement its business strategies.  All project area boundaries included in figure 1 are approximate. The reader is referred to the Company’s public disclosure record which is available on SEDAR (www.sedar.com).  Although the Company believes that the assumptions and factors used in preparing the forward-looking statements are reasonable, undue reliance should not be placed on these statements, which only apply as of the date of this news release, and no assurance can be given that such events will occur in the disclosed time frames or at all.  Except as required by securities laws and the policies of the TSX Venture Exchange, the Company disclaims any intention or obligation to update or revise any forward-looking statement, whether as a result of new information, future events or otherwise.