As a result of Riley Gold’s cumulative exploration efforts to date, Tokop is now being interpreted to have two styles of mineralization within the project land package.  Reference is being made to Tokop North and Tokop South within the global Tokop project as the mineralizing systems tend to dominate by area: the reduced intrusive-related gold (“RIRG”)/Orogenic system is better seen in the Tokop North area while the low sulfidation, epithermal system (akin to the Bullfrog Mine) is more prevalent in exposures in Tokop South. This release will focus on geophysics results from Tokop North with additional results from the Tokop South area forthcoming.

“The goal of utilizing geophysics, along with other exploration tools such as rock sampling, soil sampling, and structural mapping is to layer additional information in order to target and identify the best drill hole locations for success. We have only been working on Tokop for a little over a year and have made considerable progress in understanding previous work and augmenting that information with our own exploration in preparing a geological model for discovery of a gold deposit. This includes the epithermal mineralization in the southern portion of the project (Tokop South) which was recently identified as a secondary style of mineralization and augments the intrusive related main Tokop area (Tokop North). Our collective work completed last year has culminated into several high priority drill targets that we are excited about and are advancing towards being drill ready.”, stated Todd Hilditch, CEO of Riley Gold Corp.

Ground magnetics and gravity surveys were conducted by Magee Geophysical of Reno, Nevada, during the fall of 2021 at Tokop.  Raw data was provided to Jim Wright of Wright Geophysical in Spring Creek, Nevada, for interpretation and assistance in targeting future drilling.  Preliminary interpretation suggests several targets that coincide with recent mapping and surface sampling.  The data are simultaneously being added to ongoing modeling that includes drilling, surface mapping, as well as rock and soil sample data.

The gravity survey was conducted on a 200-m grid.  Gravity data revealed the potential for very prospective drill targets that appear relatively shallow in the newly defined target areas.  For example, drill targets are indicated near strong gravity gradients and relatively large areas of low density, possibly altered rocks. Gravity has also aided in understanding depth to bedrock under pediment cover in areas which mineralization is predominantly concealed.

The current interpretation of the ground magnetic dataset comes after an initial round of prospect-scale and regional-scale mapping at Tokop. The Riley Gold team has found that subdued magnetic highs are primarily associated with granitoids of the Sylvania Pluton but are also associated with the shaley-carbonate Wyman Formation. 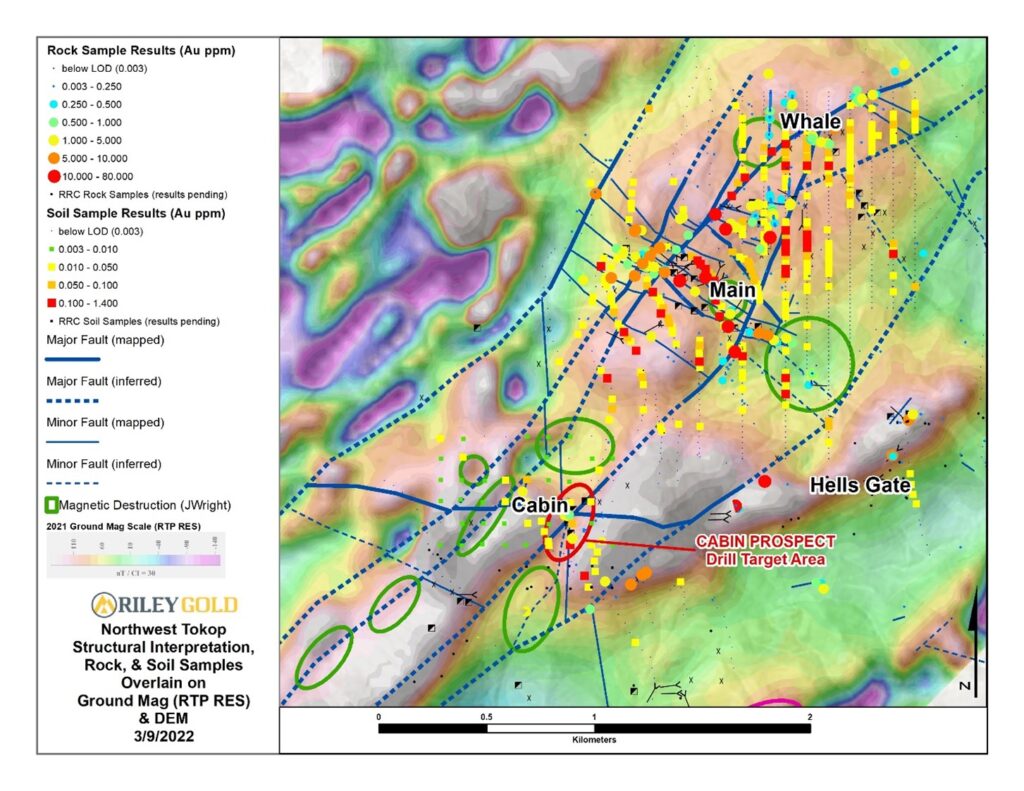 Figure 1 – Tokop North Ground Magnetics Survey overlain by Rock/Soil Samples and Structural Interpretation
Prospect-scale mapping observations include intermediate dike swarms often associated with magnetic highs; while small intermediate dikes at the surface are not large enough to visualize at the survey’s resolution, these mapped dikes are thought to overlie a larger intermediate intrusive at depth.

It is clear from ground magnetic data that the same structural fabric observed at Tokop extends beyond the Main area (within Tokop North) which was drilled in 2021 by Riley Gold. Surface rock sampling, trends in the locations of historic adits and shafts, and subsequent drilling indicate that mineralized faults at Main strike northwest; this same northwest trend in mineralization is noted in the Cabin area to the southwest of Main. Additionally, faults which strike north-south are also confirmed to host mineralization based on mapping and sampling. These northwest and north-south faults have been truncated by northeast-trending faults which are thought to be post-mineralization. Initial structural interpretation on the Tokop property has been further confirmed with ground magnetic geophysics based on the trends of magnetic highs. 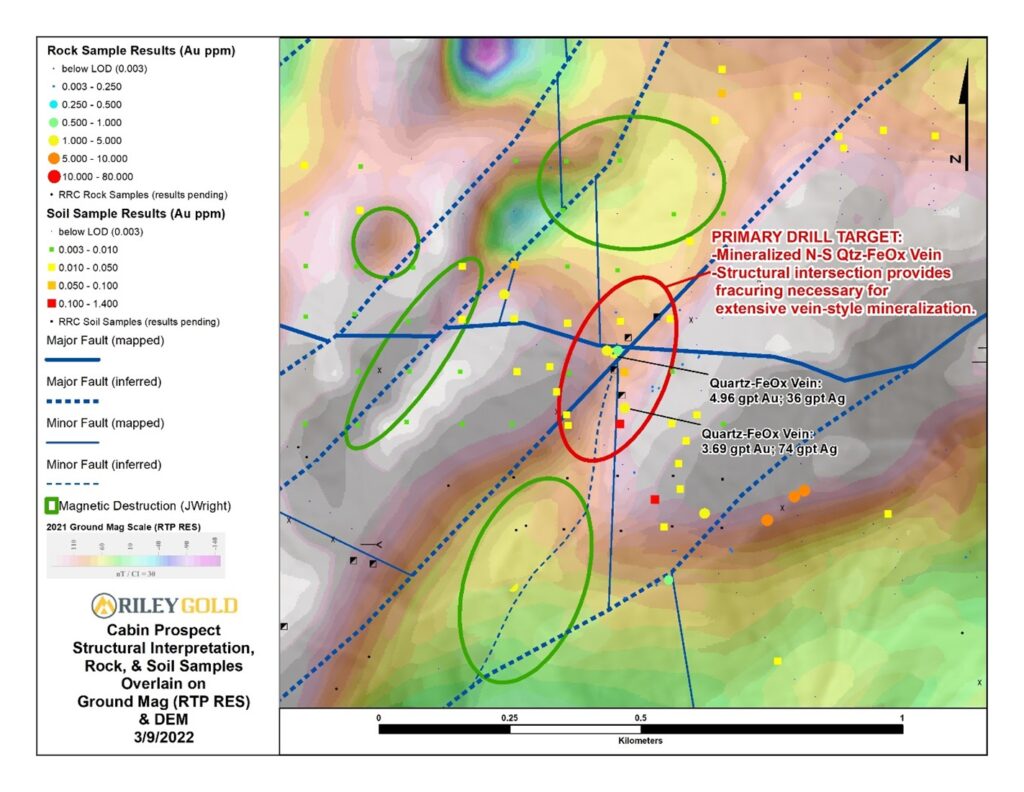 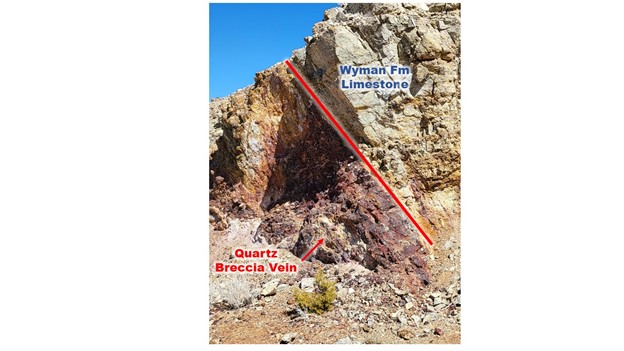 Recent work at Tokop has revealed more than one style of gold mineralization and host rock. One is a RIRG system hosted in granitoids and carbonate units, while the other a system is typical Walker Lane-style epithermal mineralization hosted in Tertiary volcanics (Ammonia Tanks tuff) as well as Wyman Formation carbonate. This style of mineralization is more akin to ore deposits approximately 30 miles south and east of the project like those of the Bullfrog District. Deposits of the Bullfrog District (surrounding Beatty, Nevada) are low-sulfidation, volcanic and sedimentary-hosted, epithermal gold deposits like the Bullfrog Mine operated by Barrick Gold which produced over 2.3 million ounces of gold and 3.0 million ounces of silver from 1989 – 1999[i], from open pit and underground workings.  Additional exploration and deposit development in the Bullfrog District includes work by Corvus Gold (now AngloGold), Coeur Mining, Kinross, and Augusta Gold Corp.

The RIRG model is similar to large mines in the Tintina Gold Belt of central Alaska and contiguous parts of the Yukon. The best known and most economically important of these include Fort Knox (>8.0 M oz gold produced through 2020 with an additional 2.47 M oz P+P Reserve[ii]), Pogo gold mine (4.0 M oz gold produced through 31 March 2021 with additional 3.956 M oz M & I resource and 1.740 M oz Inferred Resource[iii]) and the Eagle Mine of the Dublin Gulch Properties in the Yukon (M & I resource of ~2.98 M oz gold[iv]). At Tokop, similar to those mines, sheeted quartz veins in a multi-phase, reduced, calc-alkaline granitoid intrusive as well as surrounding metamorphosed sedimentary rocks, coupled with widespread hydrothermal alteration, may host gold mineralization of significant potential. Shear-hosted veins extend for nearly two kilometres along strike at Tokop. To date, sampling of these vein systems returned grades of up to 71.73 gpt gold and 970 gpt silver (historical and current sampling). This year’s drilling has confirmed high grade mineralization down dip from surface rock chip sampling in the first three holes released, with grades up to 17.1 gpt gold and 235 gpt silver.

This news release has been reviewed and approved by Charles Sulfrian, CPG., Exploration Manager, of Riley Gold and a ‘qualified person’, as defined by National Instrument 43-101, Standards of Disclosure for Mineral Projects.  The Qualified Person has not completed sufficient work to verify the historic information on Tokop, particularly in regards to the historical drill and chip sample results. However, the Qualified Person believes that drilling and analytical results were completed to industry standard practices. The information provides an indication of the exploration potential of Tokop but may not be representative of expected results.