Riley Gold’s extended review of the PWC data included historical soil and lithic sampling surveys completed by previous operators. The Company has identified that the historical surveys have open-ended gold in soil anomalies within the PWC prospective target area depicted by the red ellipse (Figure 1). As a result, Riley Gold has initiated an extensive soil sample program to complete those areas not previously covered. The new 3.8 sqkm soil grid sample area also partially overlaps the historical surveys in order to level/harmonize results and gain better information from a more modern and complete geochemical analyses. Beyond gold anomalies, there are other locally anomalous pathfinder elements in the current data set that include: thallium, mercury, antimony, and arsenic. The soil survey program is being conducted by North American Exploration, from Layton, Utah.

Additionally, the new soil survey will augment geophysical surveys (see below and Figure 2) which will aid in drill targeting expected in 2023. 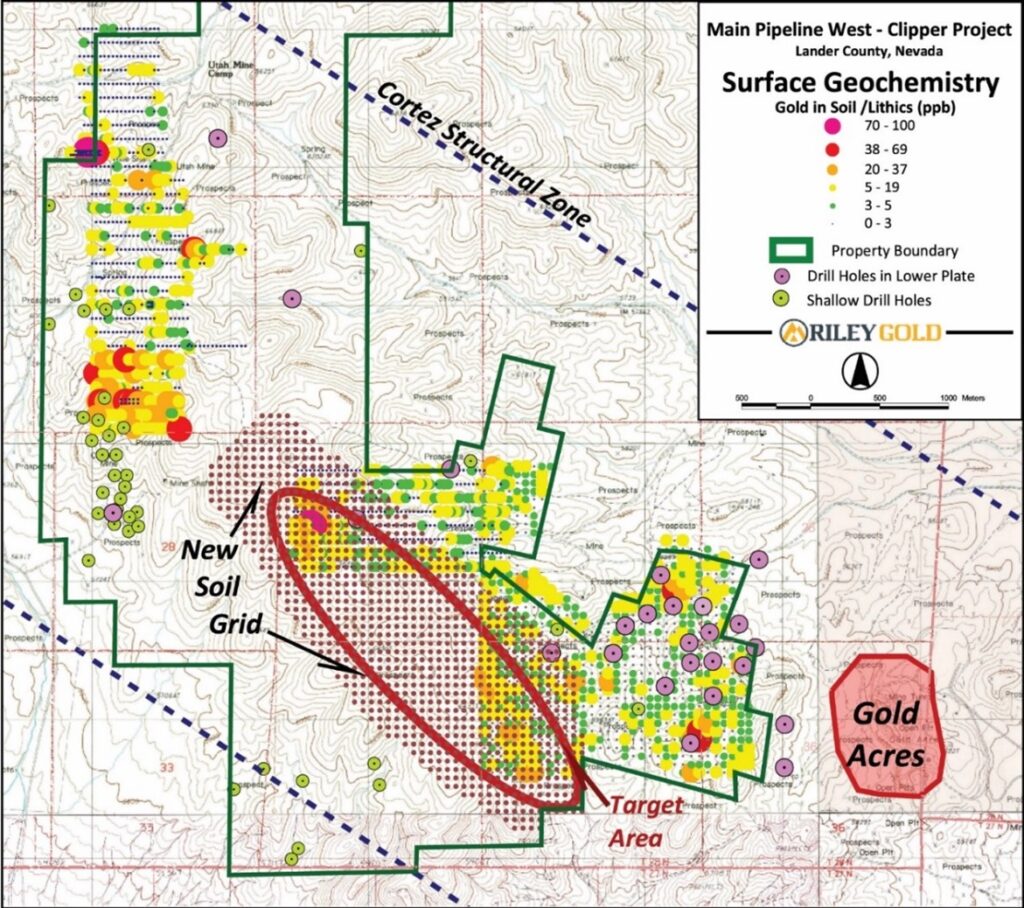 One such geophysical survey that will be aided by the soil survey (Figure 2) is a historical gravity survey (ca.2005, conducted by Zonge International of Reno, Nevada). The map shows the Horizontal Gradient of the Complete Bouguer Anomaly, which emphasizes density contrasts. Warm colors denote zones of higher gradients in the gravity and are here interpreted as high angle faults or steeply dipping contacts.   Note the strong northwesterly trend within the red ellipse. Overlapping, northwest-trending geochemical (soil samples) and geophysical anomalies (from Gravity, CSAMT, and Aero Magnetic survey) provide a strong indication of prospective drill targets along this 3-kilometre northwesterly trend. 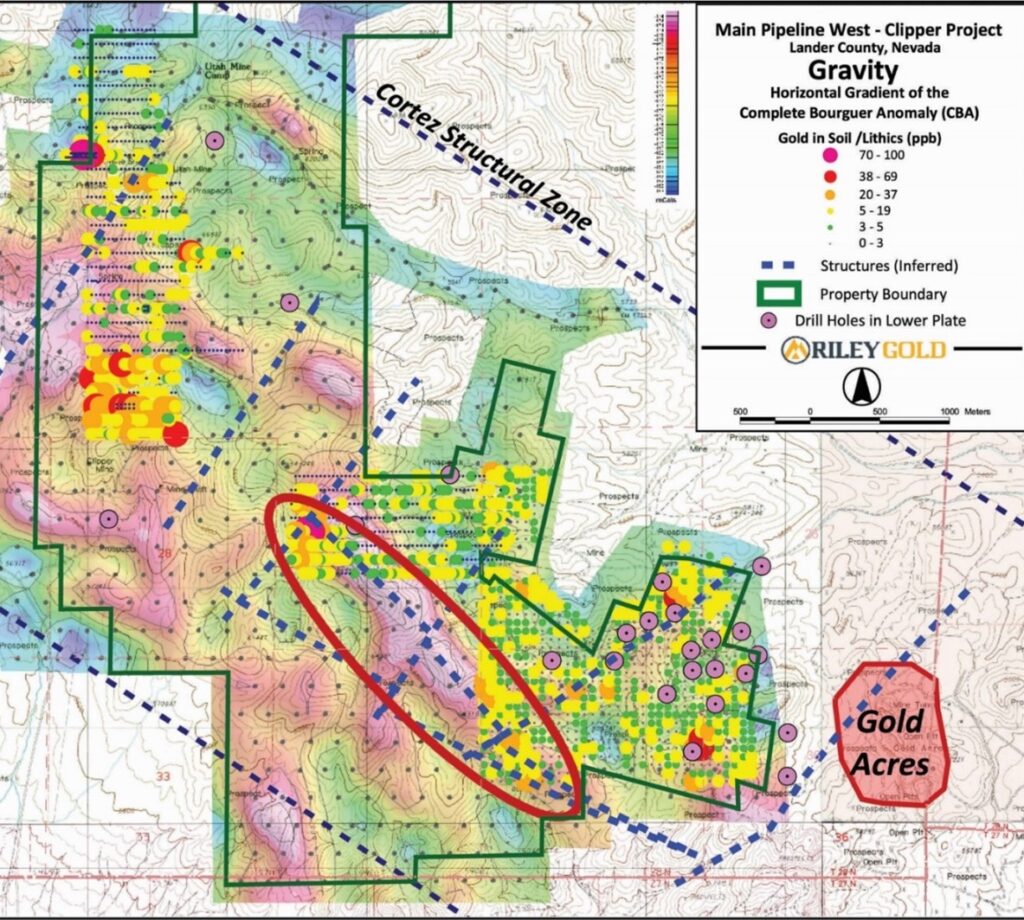 This news release has been reviewed and approved by Charles Sulfrian, CPG., Exploration Manager, of Riley Gold and a ‘qualified person’, as defined by National Instrument 43-101, Standards of Disclosure for Mineral Projects.

Certain disclosures in this release constitute “forward-looking information” within the meaning of Canadian securities legislation (such statements being referred to as “forward-looking statements”). Forward-looking statements are statements that are not historical facts and are generally, but not always, identified by words such as the following: expects, plans, anticipates, believes, intends, estimates, projects, assumes, potential and similar expressions. Forward-looking statements involve risks, uncertainties and other factors that could cause actual results, performance, prospects and opportunities to differ materially from those expressed or implied by such forward-looking statements, including statements regarding the exploration program at PWC, including results of historical drilling, sampling, geophysics, interpretations and future exploration plans at PWC including the sample soil survey.  Factors that could cause actual results to differ materially from these forward-looking statements include, but are not limited to, variations in the nature, quality and quantity of any mineral deposits that may be located, the Company’s inability to obtain any necessary permits, consents or authorizations required for its planned activities, and the Company’s inability to raise the necessary capital or to be fully able to implement its business strategies. The reader is referred to the Company’s public disclosure record which is available on SEDAR (www.sedar.com).  Although the Company believes that the assumptions and factors used in preparing the forward-looking statements are reasonable, undue reliance should not be placed on these statements, which only apply as of the date of this news release, and no assurance can be given that such events will occur in the disclosed time frames or at all.  Except as required by securities laws and the policies of the TSX Venture Exchange, the Company disclaims any intention or obligation to update or revise any forward-looking statement, whether as a result of new information, future events or otherwise.